What’s in a name?

The seminary got its name from “Cassiciacum”, a 4th century rural villa 21 miles northeast of Milan, Italy, where St. Augustine, after his conversion, formed a community composed of friends and relatives and engaged in work of holy leisure: the reading of the Psalms and the composition of his first dialogues which articulated that the search for the Divine is the search for the Truth. It was here in in the village close to the foothills of the Alps where Augustine prepared himself for baptism. 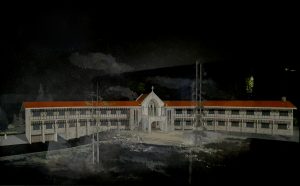 1951 — The Order purchased an 8-hectare lot from the American Jesuits in Baguio City to construct Casiciaco Recoletos which was intended originally to be a retreat and rest house for the religious.

1953 — The house received its first four religious occupants headed by the prior, Fr. Alonso Bernal, OAR.

1954 — Prior General Eugenio Ayape dedicated the chapel to Our Lady of the Pillar.

1956 — Construction of the stone statue of the Virgen del Pilar fronting the seminary façade commenced.

1965 — The house received canonical status as house of formation and philosophical studies and was renamed Seminario Mayor–Recoletos.

1966 — The government recognizes the academic program AB Classical Philosophy offered by the seminary.

1967 — The first Commencement Exercise is held, which produced (+) Fr. Delfin A. Castillo, OAR.

1970 — Casiciaco Recoletos was canonically erected as a Novitiate House. The first Novice Master was Fr. Crisostomo A. Garnica, OAR.

1982 — A subterranean water tank and a gymnasium were built.

(July 16) A 7.7 killer quake hit Baguio and destroyed structures of the seminary, forcing the 6-member Formation Team to send the 103 seminarians home.

1995 — The seminary got back its old name “Casiciaco” since “Seminario Mayor” is proper to the theologate.
2001 — A gigantic fire caused by faulty electrical wiring gutted the east wing of the seminary.

2003 — The Golden Jubilee celebration of the foundation of Casiciaco Recoletos was held with a grand alumni homecoming.

2015 — The seminary celebrated its 50th anniversary as a House of Philosophical Studies.