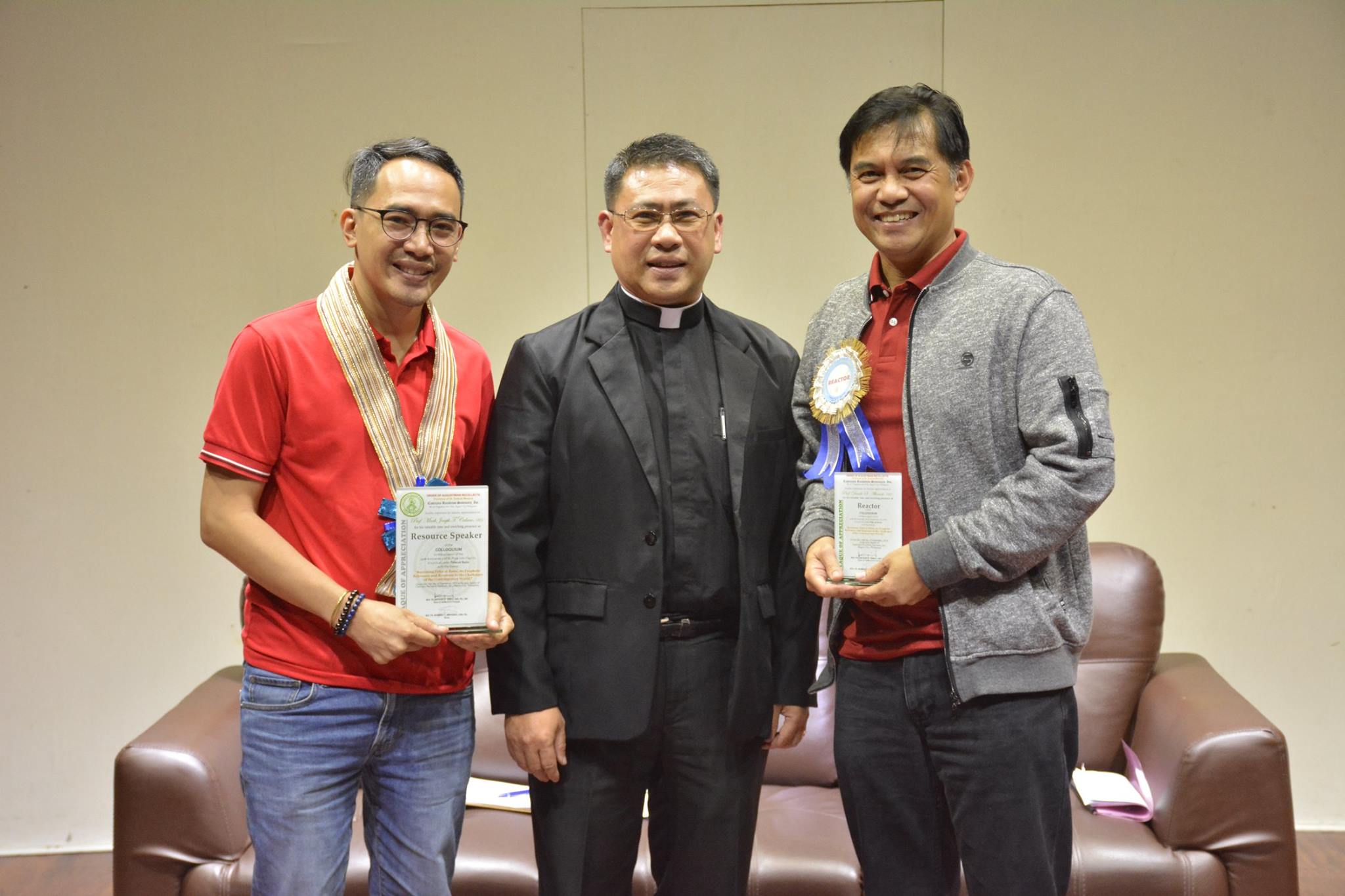 Baguio City—With either one of them missing, “both faith and reason would become impoverished.”

This was how Prof. Mark Joseph Calano summed up the contents of the papal encyclical “Fides et Ratio” (Faith and Reason) during a lecture he delivered at Casiciaco Recoletos Seminary mini-theater last Sept. 14, 2018. “Faith and reason are needed together,” said Prof. Calano, a full-time faculty member of the Ateneo de Manila University. “You cannot dispense one and choose the other” — an error, he added, which is committed by contemporary thinkers. The lecture, organized by the Office of the Dean of Studies and Senior High School Principal, was held on the celebration of the 20th anniversary of the publication of the encyclical by St. John Paul II which clarified once and for all the relationship between faith and reason in the pursuit of truth. The professor said contemporary philosophies are plagued by two (2) characteristic ailments: 1) excessive pessimism on the power of reason to attain the truth, and 2) emphasis on the limitation of the human knowing — the results of man’s setting aside faith and relying solely on his rational powers.   This was the reason why the Church had to intervene by coming up with the encyclical, he said. “It is the duty of the Magisterium (teaching authority) of the Church to make clear when there is a confusing philosophical error that could destroy simple faith,” he said. He also added that it’s a pity nowadays that “there are a lot of highly educated people yet poorly educated in faith.” He said in Catholicism, truth isn’t simply an idea. “The fullness of the truth is the person of Jesus Christ. Jesus is the answer to all philosophical inquiries, yet this is based on our faith, and faith can’t satisfy the mind. Only reason does,” he said. Left on its own, however, the mind will wander far from the truth and will not comprehend transcendental truths otherwise it could not fathom on its own — the very thing which is happening in philosophy today. “It is faith that sheds light on reason so that it can remain on the right track towards truth.” Therefore, he said, it is necessary that faith and reason go hand in hand in the philosophical enterprise, citing the first sentence of the encyclical which goes: “Faith and reason are like two wings on which the human spirit rises to the contemplation of the truth.” To drive home the point, Prof. Calano even cited the experience of St. Augustine in his search for the truth. He said that even if Augustine was filling his head with reasons from Cicero and the Neoplatonics, he didn’t arrive at the truth without the faith of Monica and Ambrose.   Dr. Danilo Alterado, a philosophy professor of Saint Louis University, in his reaction to the lecture, said that in the postmodern era, the truth is no longer universal but relative. This heightens the culture of disbelief, he said, so that philosophy, succumbing to the impossibility of knowledge, reverts back to skepticism — a tragic contemporary phenomenon. The encyclical, he added, recovers the sapiential dimension of the search for the truth by making as springboards of human inquiries — faith and reason. The Seminary Dean of Studies and SHS Principal, Fr. Anthony Irineo, OAR, said John Paul II was prophetic when he released the encyclical 20 years ago, warning philosophy enthusiasts of the dangers of not integrating faith with reason in philosophizing. He added that this year’s first year seminarians — the first batch who enrolls in the new curriculum — will have a subject called “Faith and Reason” wherein the encyclical will be used as the primary text of instruction. This was the result of the determination of the updated “Ratio Fundamentalis Institutionis Sacerdotalis” (The Gift of the Priestly Vocation), a Vatican document meant to provide guidelines for the formation of priests and religious.