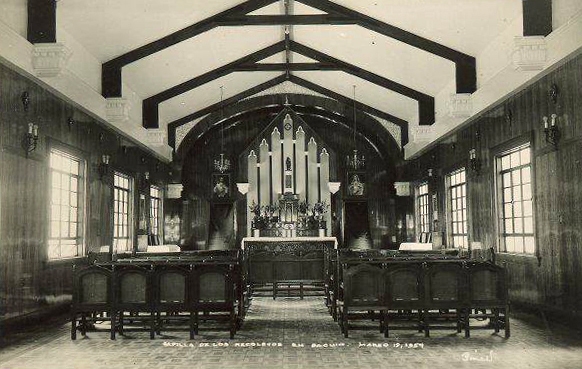 Casiciaco was originally planned to be in some other part of the Philippines but circumstances led for it to be finally built in its present site, Baguio. Looking back at the original plan, it’s quite hard to imagine the place that many people once called home to be in another place.It was in 1953 that Casiciaco was built to be a retreat house for the religious in the philippines who are having their spiritual exercises. But in 1965 it had undergone some changes to turn it into a house for philosophical studies and novitiate. With 62 years as a building and 50 years as a formation house, its portals welcomed men young and old from all walks of life all of whom heeded the call given by God to live the Recoletos way of life. People may wonder why there is a striking similarity of this edifice with those on San Sebastian Convent in Manila, and Puerto Princesa Cathedral in Palawan; its because it was designed by one man, Arch. Arturo Manalac. All of whom were built within a decade after the end of the second world war.On March 19, 1953, the Feast of St. Joseph, the seminary chapel was consecrated and dedicated to Our Lady of the Pillar. As the years went by, pews were added to this hallowed shrine but seems to be insufficient for the increasing semninary population and baguio residents that flock to attend mass with the community. In 1980, two lateral chapels were built to cater to the necessity of space in the hallowed shrine of the blessed mother.

To cater even more to ever increasing vocations in the Philippines, a three-storey annex building was built which includes dorm rooms, class rooms, and a mini theatre. It was ianugurated in January 1990 under the rectorship of Rev. Fr. Melquiades Modequillo, OAR. Unfortunately on July 16, 1990, barely six months after its inauguration, a magnitude 7.7 earthquake struck the city of pines that inflicted much damage to the new building. The place they call home is now in disarray with cracks seemingly present everywhere, forcing the community to bear the heat during the day and cold at night as they camped in the outdoors for fear of the building’s collapse if seismic activity does not come to a halt. A diaspora of seminarians to San Sebastian in Manila, Mira-Nila in Quezon City, and University of San Jose-Recoletos in Cebu came about so that the formation of seminarians will not cease despite of the closure of the institution for safety reasons. By the end of July seminarians were able to come back to Baguio once more when seemingly endless Manualia and Laborandum await them. Fortunately enough, Casiciaco once more opened its doors to formands in November 1990 after much needed repairs were done to secure the stability of the building.

In 1996, the name Seminario Mayor Recoletos was changed into Casiciaco Recoletos seminary under the rectorship of Rev. Fr. Lauro V. Larlar, OAR
A year after casiciaco crossed the threshold of the new millenium, a devastating fire gutted the right wing of the original edifice on May 2001 because of faulty electrical wiring. Oldphytes and neophytes were welcome be the charred remains of their Baguio home but this did not hamper the spirit of the seminarians but instead strengthened their community life in picking up the pieces and building over the remains of what was Casiciaco.

Life had to continue and Casiciaco rose from the ashes as the right wing was rebuilt. The Chapel was likewise refurbished to accomodate more people who flock to Casiciaco during Sundays and the Simbang Gabi. The new developments were inaugurated just in time for the 50th year of Casiciaco as a building in 2004.As we celebrate the 50 golden years of the seminary, we look back at the history of the place where talent is at its finest; where people’s warmth can beat the freezing cold in this mountanous terrain; where joy can be found in the simplest things; where smiles and laughter is more contagious than any virus there is; and where bonds among brothers grow and become stronger than any earthquake. Truly there is no place like Casiciaco.