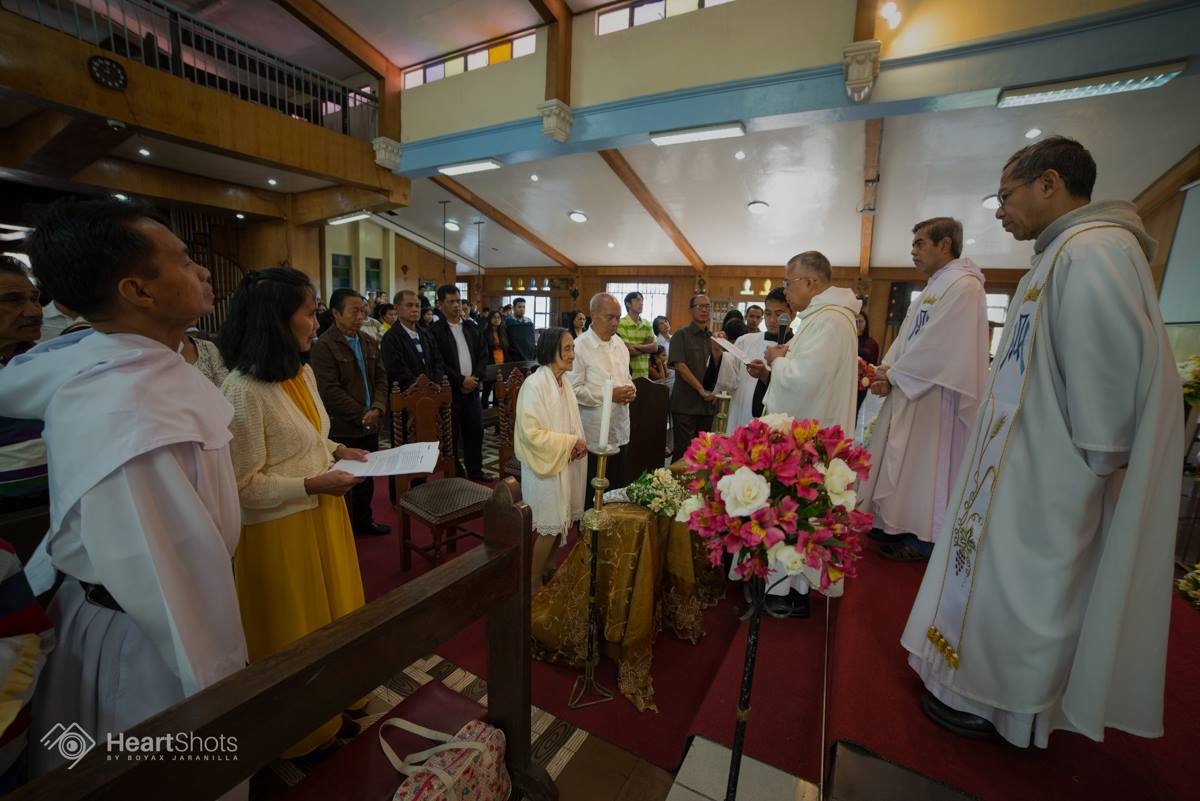 A year ago, a renewal of vows for a couple who were in their senior years was held at the seminary chapel. I found it sweet that their love endured many decades, yet they were looking at each other as if it was their first time to get married. I was not aware who they were that time, but I found out later that they are Manong Fulgencio and Manang Consolacion Culaton, parents of one of our kitchen personnel. I learned that Manong Fulgencio is considered a pillar of Casiciaco Recoletos Seminary; having served the seminary for more than 60 years. He has seen a great deal of the history of the seminary throughout those years. He was neither a seminarian nor a formator, yet his story is similar to theirs: he was called to be in the seminary for no other reason but to serve.In 1952, Manong Fulgencio who was then 23, came to visit a cousin in Baguio. Through him he learned that the Recollect Fathers were looking for someone to help them. Casiciaco was then under construction and the pioneers of Recoletos de Baguio were living in Villa Sta. Rosa in Quezon hill. He did not immediately accept the job, but left his contact with them before he went back to work for a Chinese businessman in Sta. Cruz, Manila. A few months later, he received a telegram asking him to come to Baguio to work for the Recoletos. He left Manila two hours after receiving the telegram. He did not inform his employer, thinking that he would not permit him to leave his work.

Upon reaching Baguio, he reported immediately to Fr. Simeon Asensio and the other members of the new Baguio community. He was first assigned to help supervise the completion of the construction of Casiciaco. When the retreat house finally welcomed its occupants, he performed his tasks like any hardworking fellow would do, making sure work was properly done and taking on other things afterwards to make good use of his time. He did various works-from a room boy, cook, gardener, driver and perhaps anything he can afford to do. He accomplished all those things at a time when seminarians were not yet there to do laborandum and manualia in the vast grounds of Casiciaco. Seminarians at that time were residing in San Sebastian and come to baguio only during summer for their spiritual exercises in Casiciaco.

Although its normal to encounter conflicts, Manong Fulgencio experienced a different kind; one that could pass for as a scene in a movie. After a few years working with the Recoletos, he had a misunderstanding with a person who was quite strict and frank in dealing with people. Manong Fulgencio attempted to throw a beer bottle from the kitchen to this person and attempted to chase him with ax along the corridors of the seminary. Without any intention of inflicting harm, he was able to corner him outside his room. He attempted to end the misunderstanding and settle it in a gentlemanly manner but perhaps because of the intimidating ax, he refused to speak to him.

To cut the story short, he just decided to quit work and find another way to earn a living. He worked for a taxi company in Baguio after his stint in Casiciaco. After two years, he once again worked with the religious; this time with the Dominican Fathers in Manaoag, Pangasinan. Because of his charisma; good work ethic; and of course his wonderful cooking; he became the head of the kitchen in the Manaoag convent. There, he just came in and gaive instructions to his co-workers on what to prepare for the meals and go home. Life and work was easier for him, to say than least.

It was in 1968, during the tenure of Fr. German Chicote, OAR, as prior of Casiciaco that Manong Fulgencio found his way back to Baguio. This time it’s for good.

While working for the Dominicans, he received a visitor from Recoletos, sent by Fr. Chicote, urging him to come back to Baguio and be with the Recoletos once more. It may come as a surprise that he came back to Baguio despite of his somewhat comfortable job in Pangasinan. The Dominicans tried their best to stop him from leaving. They offered him an increase in salary, a house, among other things, yet nothing could make him stay in Manaoag.

Back in Baguio, he became a full-time driver, helping out with other chores in his free time. On his day-offs, he would drive a taxi to earn more. He did this for decades. Even after his retirement in 1983, he continued to serve Casiciaco. Aside from his usual work in the seminary, he became a member of the Secular Augustinian Recollect Fraternity. He was also a pioneer member of the CaReS Family Apostolate and served as a foster parent to many seminarians. In doing so they were able to have a father who guided them on the path to religious life while in Casiciaco, their home away from home.

Because of his decades of tireless service to the seminary, Manong Fulgencio was bestowed the title, Hermano General (Brother General) of the Order of Augustinian Recollects in which he will receive spiritual privileges and indulgences fit for a religious.

The legacy of service continues.

Manong Fulgencio’s only son, whom he named Agustin after the spiritual founder of the Order, was selflessly offered to God by becoming a religious Brother of the Order of the Augustinian Recollects. He was previously assigned as a formator in San Ezekiel Moreno Novitiate-Recoletos in Antipolo City and now in Sto. Tomas de Villanueva Recoletos in San Carlos City, Negros Occidental.

After Manong Fulgencio’s operations in 2003, it was decided that he should retire already. His youngest daughter, Elena was asked to take the place of her father. She was an active youth member in her teenage years and later became a member of the Secular Augustinian Recollect Fraternity like her father. Now she is one of the seminary kitchen personnel.

Every now and then, you see Manong Fulgencio attending the mass, especially during the Simbang Gabi. He would rise early and bear the shivering cold of Baguio to be on time for the Simbang Gabi.

Looking back at his decades of service, we can truly say that there is no other man who witnessed the 50 years of the seminary as Manong Fulgencio did. Like all everyone else called by God, he left the comforts other places and heed the call to service in the seminary. All the trials and difficulties he went through became just another reason for him to laugh; it just added color and spice to the stories that he would tell.